"On the trail of Karl Heinrich Waggerl and Joseph Mohr"

The Grafenberg lift provides a convenient way to reach the start of this stage. From the summit station we have a short initial walk down to the actual start of the Almenweg, followed by a relatively flat hike to the Auhofalm.

After this the trail branches off to the left and we begin a steep climb up to the Kitzstein (also known as the "Gabel"). Once we have reached the rather drawn-out ridge line which leads to the summit, we will have completed the most strenuous part of this stage – from now on the trail only ascends gradually up to the summit.

Shortly before we get there, however, the footpath once again descends along the mountain’s western flank. When we reach a fork in the trail, the Almenweg takes us to the right until, after 1.5 km, we come to another fork. If you have more athletic ambitions, you might wish to head off via the Penkkopf to the Kleinarler Hütte, or you can take a left and continue downhill along a flattish hiking path.

After the hut and a short stretch on the access road, we will make our way down the footpath into the valley. After crossing the forestry road, a paved access road will take us to the Hirschleitenbauer.

A footpath to Kleinarl begins between the stables and the farmhouse, first crossing a meadow and then heading steeply down through the forest, meeting up with the access road once more. We will make a right onto this, but only stay on it briefly, then make a left over an embankment and follow a newly constructed footpath back to town and the Kleinarl tourist information office. 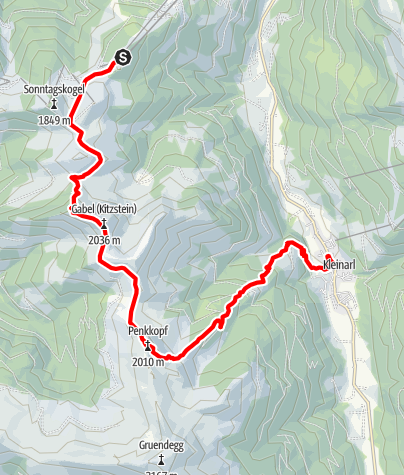