This stage lends itself as a round tour. Coming from the Untersberg, the route takes us gently uphill - crossing the "Legend Trail" - to the Huberalm and on to the chapel.

Here it joins the Salzburger Almenweg which runs behind the chapel and makes its way up along a forest path to the Rauchkögerl. A little below the summit, it heads to the left, past a high moor, and towards the south. Staying on this high ridge and passing a number of small ponds and moors, we now reach the Hahnbalzköpfl.

Climbing slightly, the trail leads to what is the highest point of this stage so far (cross below the Bernkogel, elev. 1,897 m). After another 150 m in the direction of the Bernkogel, the trail branches off both to the left and the right.

VARIANT: The left-hand trail runs laterally across the scree and down to the Amoser Hochalm, from where we make our way across the eastern flank of the Bernkogel direct to the Heinreichalm - easier variant, since there are barely any climbs, but watch out for falling rocks!

The main trail goes to the right, at first downhill for a while and then steadily climbing, circling the Bernkogel and the Sladinkopf on the western side. After the "saddle" south of the Sladinkopf (highest point, elev. 2,200 m), we now drop down 500 vertical meters along a steep series of switchbacks, finally reaching the finish of this stage at the Heinreichsalm. After a well-earned rest, you can, if you choose, hit the trail to take you all the way back down into the valley.

Drei Waller Chapel stands atop the Wallerhöhe (elev. 1,400 m), on an alpine saddle which once served as the route used to reach the valley from the north.  Tradition has it that, towards the end of the 7th century, three pilgrims ("Waller") passed this spot on their way to the valley.  They brought with them three precious gifts for the locals: a plough, a mining hammer and the bible.  After their deaths, they were buried close to one another and three huts were built over their graves.  Archbishop Wolf Dietrich had a chapel constructed at this ancient cultural and pilgrimage site back in 1592. 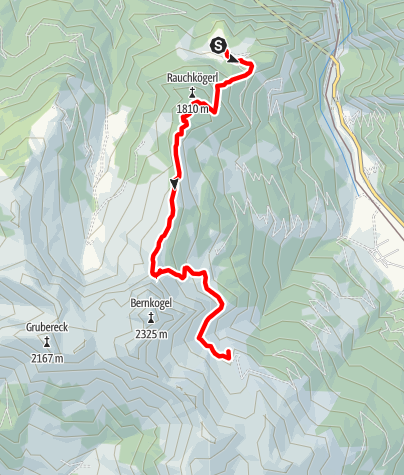